Through the mail I received a colour brochure & 2 scratch & win tickets from a Malaysian tour company called Triple Moon Tour (www.triplemoontour.com) celebrating their 15th Anniversary. One of the tickets revealed a 2nd prize of US$200,000. On contacting the promoters Triple Moon Tours, and after various lengthy phone calls I was asked to phone the prize sponsor from Bruce and Megan Limited in Hong Kong (www.brucemeganlimited.com) to arrange the transfer of the prize money.
The conversations sounded very legitimate and convincing, although I was sceptical throughout.
The scam was that I had to transfer 3.7% of the value of the transfer (US$3700) to the Hong Kong courts to prove I was a legitimate receiver for that large sum of money leaving Hong Kong.  Not likely!!
I discontinued contact from that point, and no funds where transferred to them, or to me ;-), shame I would have liked $200,000!

Anyway, as they saying goes “If it looks to good to be true… It probably isn’t true”

Please be aware and sceptical. 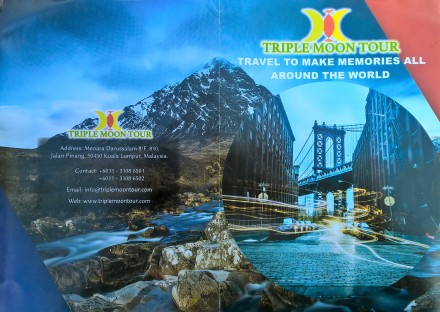 View all posts by techassistnz